“The mother of all shows! Mom’s the Word is a great night out – away from the kids.” The Herald Sun, Sydney, Australia

Written in 1993 by Vancouver theatre artists Linda A. Carson, Jill Daum, Alison Kelly, Robin Nichol, Barbara Pollard and Deborah Williams, Mom’s the Word has been produced in 19 countries, in 14 languages, delighting anyone who’s ever been or ever had a mother.

“A blisteringly funny and perceptive piece of theatre… [a] wickedly funny account of motherhood that nobody should miss…” The Stage, London, UK

Back in 1993, Linda, Jill, Alison, Robin, Barbara and Deborah would get together every Saturday to talk and write about their new lives as mothers. Those Saturdays were cathartic - each woman revealing their hopes and fears and the pandemonium they were experiencing. Vancouver’s Women in View Festival asked the six moms to put together a one-off performance of their writing.

Their unbridled tales of parenting struck a chord and before long they were delighting audiences across Canada. Their first presentation at the Belfry was in 1995 and two years later the show was being produced in Australia, Scotland, Chicago and in London’s West End.

“…a hilarious coup de theatre that you have to see for yourself.” The Daily Mail , London, UK

The moms went on to write a second show, Mom’s the Word: Unhinged, as their children became teenagers, and that too, became a worldwide hit.

The Belfry’s all new production of the original show is the first time in Canada the show has been done with a new cast.

Trish and Yumi are making their Belfry debuts in Mom’s the Word. At the Belfry, Jennifer starred in Homechild, Sarah in One Last Kiss and The Life Inside, and Lisa in the acclaimed production of The Rez Sisters.

Show Sponsors
Mom’s the Word is generously supported by Mothering Touch and the Belfry Business Circle.

Season Sponsors
The Belfry is generously supported by The Times Colonist, Cook’s Day Off and Helijet.

Ticket Information
Tickets for Mom’s the Word range from $20 to $59 (plus GST). Tickets are available at 250-385-6815 or online at tickets.belfry.bc.ca. Prices are subject to change.

> available at the Box Office 30 minutes before each evening performance (Tuesday to Friday),
> in person only,
> subject to availability, and
> 40% off our regular Zone 2 (Yellow Section) ticket prices. 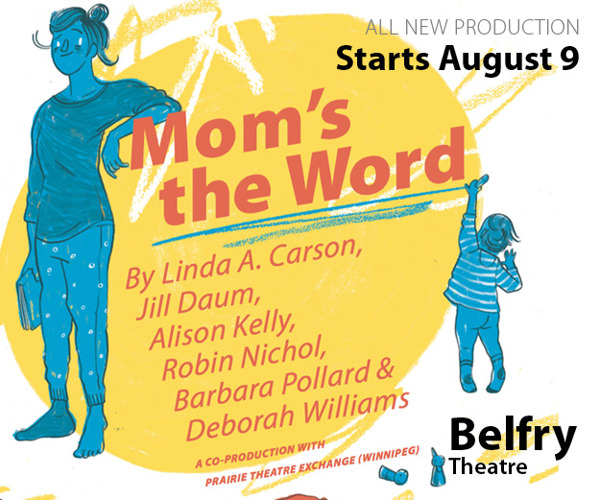