The play premiered in 2014 in Calgary at the High Performance Rodeo and began touring this year with a run with Mirvish Productions in Toronto. BOOM is part of a larger transmedia project that aims to bring history to the next generation of Canadians.

Rick is one of Canada’s most respected multi-disciplinary performers, with credits ranging from classical theatre to the avant-garde, from musicals to live comedy, from voice work to film & television. He has been called “one of Canada’s most dazzling performers” (Toronto Star), and the “most virtuosic voice in the country” (Edmonton Journal).

MacHomer, Rick’s hilarious mash-up of “the Simpsons” and Macbeth enjoyed runaway success, playing in 165 cities around the world, including three stints in Victoria.

Bigger Than Jesus, Rick and Daniel Brooks' "sinfully funny" multimedia mass also became an international success story, playing in 6 countries and 4 languages, including a run at the Belfry back in 2007.

BOOM chronologically documents a historical period stretching from that first ‘Boom’ in 1945 all the way to the explosive launch of Apollo 11 bringing the first human beings to the Moon. These two iconic moments bookend 25 of the most tumultuous years in modern history, fuelled by a generation of children with incredible influence due to their numbers, and to the advances of technology and communication. In the BOOM generation, politics and culture merged like never before – and perhaps never again.

"Astonishing.... BOOM is not simply a superlative theatrical experience, but I’d venture to say that it will change the way we think of historical-docu period plays from now on." CBC Radio

BOOM is generously supported by the Belfry Business Circle.

The Belfry is generously supported by The Times Colonist, Thrifty Foods and Cook’s Day Off.

The Belfry is funded by the Canada Council for the Arts, the Province of BC, BC Arts Council, CRD Arts Development and the City of Victoria.

Fridays and Saturdays at 8 pm 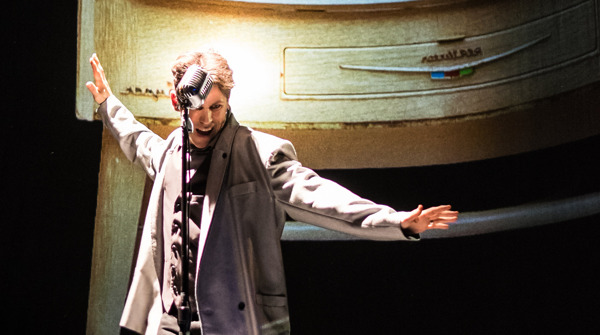