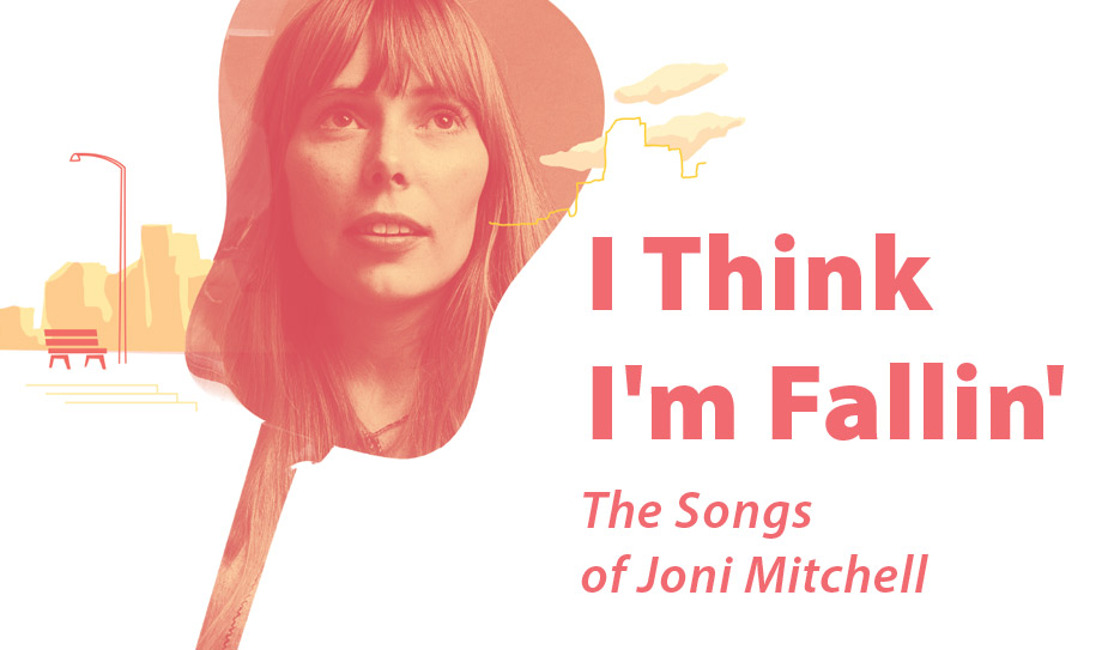 Last season Jonathan Gould starred in Chelsea Hotel and Anton Lipovetsky starred in A Christmas Carol. Brent Jarvis, Evangelia Kambites and Linda Kidder are all making their Belfry debuts in I Think I’m Fallin’ - The Songs of Joni Mitchell.

“She's a better poet than Dylan and without question a far better musician. I don't think there's anybody who can touch her. James Taylor comes close, but I think it's her, and I don't think the record companies ever realized that or have known what the story was.” David Crosby

Following the success of last season’s Chelsea Hotel - The Songs of Leonard Cohen, this new musical, focussing on the work of another Canadian icon, is a perfect fit. The Belfry has a long tradition of producing musicals, and the company’s venue, a converted 19th Century church, adds a soulful richness to any musical.

“The choice of Joni Mitchell was extremely easy... Her lyrics are exceptional: complex, full of quirks and surprises, and at the same time, completely recognizable and easy to relate to. Her music is equally outstanding: melodious, confident, multi-layered, and able to insinuate its way into your soul.” Michael Shamata

Using only Mitchell’s stunning words and music, I Think I’m Fallin’ - The Songs of Joni Mitchell features 17 of her songs (from 1968 through 2007) woven together to create a world of love and longing, of joy and heartbreak.

Joni Mitchell’s contributions to the world of music are legendary - she’s crossed folk, pop and jazz borders, working and recording with some of the best in each genre.

Her songs have been covered by thousands of other artists including Led Zeppelin (Woodstock), KD Lang (Help Me), Annie Lennox (Ladies of the Canyon), Keb’ Mo’ (Big Yellow Taxi) and sampled by the likes of Kanye West and Janet Jackson. Both Sides Now has been recorded by over 1100 artists.

Joni has been nominated for 16 Grammy Awards, won 9, and was inducted into the Grammy Hall of Fame in 1999. She will turn 73 the week that I Think I’m Fallin’ - The Songs of Joni Mitchell opens.

Live Events
Throughout I Think I’m Fallin’ - The Songs of Joni Mitchell we’ll host a number of events that will deepen our audience’s experience.

AFTERPLAY
Facilitated discussions – audience member to audience member – following every evening Mainstage performance of I Think I’m Fallin’ - The Songs of Joni Mitchell (except Opening Night and Talkback Thursday). These are a great opportunity to share your thoughts and hear how fellow patrons reacted to the show.

TALKBACK THURSDAY
Thursday, November 17
Meet the actors from I Think I’m Fallin’ - The Songs of Joni Mitchell post-performance when they return to the stage to answer questions and provide insight into the play.

VOCALEYE
Sunday, November 27 at 2 pm
For our patrons with low or no vision, we’ll offer a VocalEye performance during I Think I’m Fallin’ - The Songs of Joni Mitchell. Trained Audio Describers provide descriptions of the visual elements of the show, allowing people with low vision to enjoy the theatrical experience without missing any of the details.

Show Sponsors
I Think I’m Fallin’ - The Songs of Joni Mitchell  is generously supported by TD, The Co-operators, Allison Piano, and 98.5 The Ocean.

Season Sponsors
The Belfry is generously supported by The Times Colonist, Thrifty Foods, Cook’s Day Off and Helijet.

Ticket Information
Tickets for I Think I’m Fallin’ - The Songs of Joni Mitchell range from $20 to $53 (plus GST). Tickets are available at 250-385-6815 or online at tickets.belfry.bc.ca. Prices are subject to change.